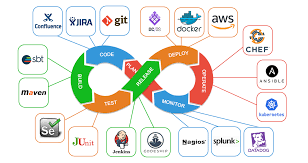 THE WORLD OF DEVOPS

DevOps is a practice combining the Development Operations and the System Operations. "DevOps" as a term was first coined in 2009 by Patrick Debois, who became one of the chief proponents for DevOps. DevOps brings together software development and operations, amalgamating the two disciplines, encouraging communication, collaboration and cohesion between the traditionally separate developers and IT operations teams.

The DevOps methodology recognizes the interdependence of the development group and operations group and integrates it into one department/team, thereby helping an organization deploy software a lot more frequently while also maintaining service stability as well as gaining the pace required to breed innovation.

ABC Software's is a product-based company

Following are the specifications of the lifecycle:

1. Git Workflow has to be implemented

2. Code Build should automatically be triggered once a commit is made to the master branch or develop branch.

3. The Code should be containerized with the help of a Docker file. The Docker file should be built every time there is a push to Git-Hub. Use the following pre-built container for your application:

a. The code should reside in '/var/www/html'

4. Once the website is built, you have to design a test case, which will basically check if the website can be opened or not. If yes, the test should pass. This test has to run in headless mode, on the test server.

5. The above tasks should be defined in a Jenkins Pipeline, with the following Jobs Job

6. Since you are setting up the server for the first time, ensure the following file exists on both Test and Prod server in /home/ ubuntu/config- management/status.txt. This file will be used by a third-party tool. This should basically have the info on whether apache is installed on the system or not.

7. Create a Monitoring Service for the website on the Production server Architectural Advice:

Enroll Now. for easy to start your course.

© 2008-2021 JavaTpoint developed and managed by JavaTpoint