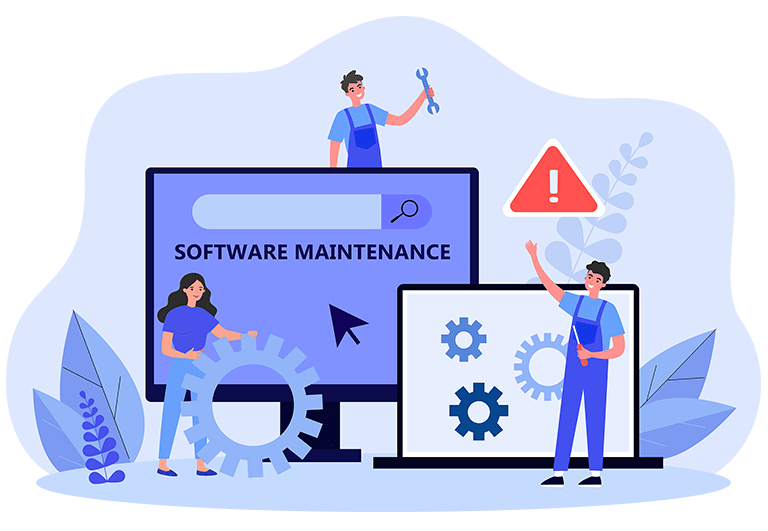 Software Engineering is a brief analysis of the requirements laid down by the user. After that, designing, building and performing the test on the developed software applications that can satisfy the user's needs.

The main aim of software engineering is that they are meant to ensure that the software should be developed consistently with correctness within the time limit and following the budget defined for the particular project.

In this tutorial, we will learn about the following things as the part of software engineering is as follows:

What do you understand by the term Software Maintenance?

The term software maintenance can be defined as the process of updating the particular software as well as improving it under the requirement of the client, these processes are performed after the initial release of the developed software to the public, and the software maintenance occurs just after the task has been completed that are related to the engineering, design, architecture, implementation, testing as well as the deployment of the software.

Furthermore, product maintenance is not only about fixing the occurred bugs or errors and adding more lines of the code rather than that it is considered to be the comprehensive set of activities used to do modifications. The adjustment of the software and the time taken for the development of the software is about to be two years, and the time taken for the Maintenance can last up to 15 to 20 years.

Need for the Software Maintenance

There are various reasons why the Maintenance of the software is required to be done depending upon the need of the developed software; some of the reasons are as follows:

Types of the Software Maintenance

According to Herb Krasner, software maintenance can be categorized into four types that are as follows:

For example: Let us assume an app or the website that, in turn, allows the people to authorize with the help of their social media accounts, and when we deploy it then, our end-users start getting notified that they cannot log in to their app, and it is due to the possibility that there could be a bug or the errors in the existing code that the messes with the respective authentication process and the fixing of the occurred bugs that are already existed when the separate software gets released is only termed to be the corrective Maintenance.

For example, We have created and released a native app for Android but later on decided to add an app for iOS also, or also due to some changes in the third-party API (Application Program Interface) that stops users from authorizing it properly, and we don't have a bug in the existing code. Still, it must adapt the software to the environment to function well without creating difficulties.

For example, We have released the software or the app in the market, and after its release, we can ask for feedback from the user. Suppose the user has experienced the dark side of the apps or the software. In that case, he will give feedback according to that and then the team can make changes in the existing software or the app according to their needs and the feedback received from the various users.

What are the Software Maintenance Cost Factors?

There are two types of factors that are affecting the Maintenance of the software as follows:

Technical Factors: The various technical factors are as follows:

6)Configuration Management Techniques: The documents that are kept must be consistent and easy to handle the cost related to the Maintenance, and if the configuration is made effective, then automatically, the maintenance cost will be lowered.

Moreover, it is painless for the original writer of the program to understand it and make modifications according to that rather than the person who only reads the code and makes modifications.