Why Is Regression Testing Required? Javatpoint

How are test cases chosen for regression testing?

Regression strategies that work well save businesses time and money. Regression can save up to 60% of the time in issue repairs (which would have been discovered by regression testing) and 40% of the money, according to one case study in the banking industry. 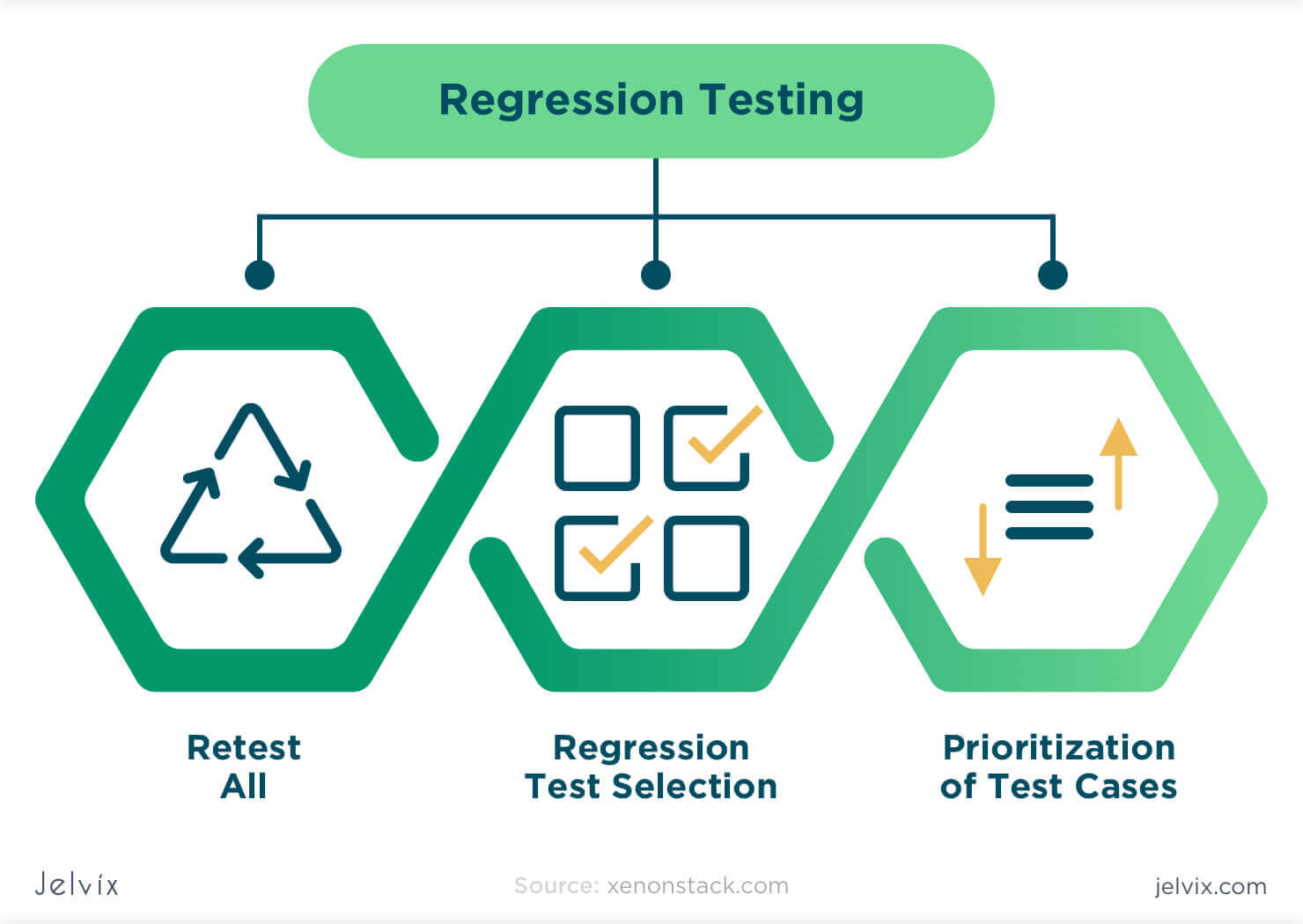 Before discussing regression and progression testing, it is essential to acknowledge their importance in the larger context of testing. Stages are typically used to break up software testing. Unit testing is the first of them, and it is carried out when functions are created. The next step is integration testing, which involves testing numerous functionalities as a single functional unit. System testing follows. Now, you may test your entire piece of software for bugs and functionality. The programme must be tested in some way to ensure that it satisfies the demands of the end-user. The system testing normally includes regression testing and progression testing.

What is Regression Testing?

This testing guarantees that any new code changes won't affect how things work now. It ensures that the older code still works even after the most current code revisions.

Why Is Regression Testing Required?

How are test cases chosen for regression testing?

During an industrial inspection, it was found. The client reported a number of issues that were brought on by emergency bug fixes. Selecting the Test Case for regression testing requires skill and is not a straightforward process since producing side effects is difficult.

A regression test can be performed by:

1) A test case with multiple flaws

7) A selection of successful test scenarios

When is it suitable to do Regression Testing?

When the production code is changed, we perform regression testing.

We should do regression testing in the following cases:

1. Whenever new features are added to the software.

2. When a Change Requirement exists.

Keep in mind the password that was previously valid but was deleted from the login screen.

3. When the flaw was corrected

Consider a scenario where a tester discovers a login page with a broken login button and files a bug report. When developers have repaired an issue, the tester checks to see if the Login Button is functioning as intended. The tester also examines additional features connected to the login button concurrently.

4. When a performance problem is fixed

A home page loads in 5 seconds, cutting the load time in half to 2 seconds.

5. Whenever there is an alteration in the environment

When we switch between MySql to Oracle for the database.

Before performing the Regression Testing procedure, we should first debug the code to find the flaws. After the defects have been found and the necessary adjustments have been made, regression testing is carried out by choosing appropriate test cases from the test suite, which covers both the updated and the impacted portions of the code.

Software maintenance includes enhancements, bug fixes, optimisation, and elimination of current functionality. The system might not function properly as a result of these adjustments. Regression testing is hence required. The following process should be used to do regression testing:

• This is another regression testing method that calls for re-running each test in the existing test bucket or test suite. Due to the significant time and money required, this is quite costly.

I. Sort the test cases in order of business importance, critical functionality, and usage frequency. The regression test suite would be significantly reduced if test cases were chosen and prioritised.

Regression testing expenses will rise if your programme is often modified. In certain situations, manually running test cases lengthens test execution and raises expenses. In these situations, automating regression test cases is the best course of action. The amount of test cases that are still relevant for subsequent regression cycles determines the level of automation.

With only a few clicks of the mouse, you can test end-to-end business operations with the aid of Avo Assure, a no-code test automation solution. Regression testing is simplified and expedited as a result.

Telerik Test Studio is an automated test platform to support functional UI, load, and RESTful API testing for web, desktops, and responsive apps. Teams may use Test Studio to prevent regressions and ensure that their apps continue to function as they did before any modifications were made. It has interaction with Visual Studio and a standalone IDE.

4. Elements depending on their ID and images.

5. Support for Docker and CI/CD Integration for Continuous Testing

You may immediately describe tests as operational specs in plain English with the aid of testRigor. Customers of all technical levels may create end-to-end tests that span the smartphone, web, and API phases in a single test and can range in complexity. Instead of depending on implementation-specific features like XPaths or CSS Selectors, test steps are stated at the end-user level.

4. How to learn automation the quickest

7. Testing of email and SMS

8. A single test for Web, Mobile, and API phases

A cloud-based, "truly codeless" test automation tool called Subject7 allows anybody to be an automation expert while unifying all testing on a single system. Our user-friendly platform offers high-scale executions that execute thousands of daily tests, as well as quick, simple, and complex regression test creation without generating a line of code.

2. High-scale parallel processing with enterprise-level security in the cloud or on-premise.

1. Eggplant can test the most crucial components of every release because of AI-driven test execution.

3. Use self-healing functional tests to lessen the workload associated with test maintenance.

4. Recognize the problematic parts of your software that risk the release and concentrate on them.

5. Use exploratory testing that is automatic to find issues that you would have missed otherwise.

It is a fully accessible tool for web app automation. Regression testing with browsers is possible with Selenium.

Automated software called HP Quick Test Professional is made to run functional and regression test cases automatically. For automation, VBScript is used. It is a keyword-based, data-driven solution.

Regression testing in agile environments, in which the code is frequently changing, requires configuration management. Be careful you follow these guidelines to guarantee successful regression tests:

1. A configuration management solution must be used for the code being regression tested.

3. The regression testing database has to be segregated. No database modifications are permitted.

The distinction between re-testing and regression testing is as follows:

Retesting is the process of checking the function or bug to make sure the code has been repaired. The defect must be raised if it is not corrected. The defect is closed if fixed.

Regression testing is the process of evaluating your software programme after a code update to make sure that other areas of the product have not been harmed.

The following are the main issues that arise when performing regression testing:

1. Test suites grow rather vast when regression runs are performed. The whole regression test suite cannot be run due to time and cost restrictions.

2. It isn’t easy to enhance test coverage while limiting the test suite.

3. It might be difficult to decide how frequently to run regression tests, such as after each modification, each update to the build, or after a large number of problem fixes.

What benefits does regression testing offer?

Benefits of regression testing include:

1) Regression testing improves the excellence of the final output.

2) It ensures that any updates or bug fixes do not affect the product's current functionalities.

4) It ensures that the problems solved do not reoccur.

What are Regression Testing's drawbacks?

Regression testing has several benefits, but there are also drawbacks.

Regression strategies that work well save businesses time and money. Regression can save up to 60% of the time in issue repairs (which would have been discovered by regression testing) and 40% of the money, according to one case study in the banking industry.

Regression testing is crucial since it helps organisations produce a high-quality product while saving them time and money. A high-quality result is produced by ensuring that every modification in the code does not impact the existing functionality.